Here’s a fantastic video showing a UFO sighting that’s passing by the Moon.

There’s a guy talking but I’m not sure what he’s actually saying because it’s not in English and English is the only language that I can speak. 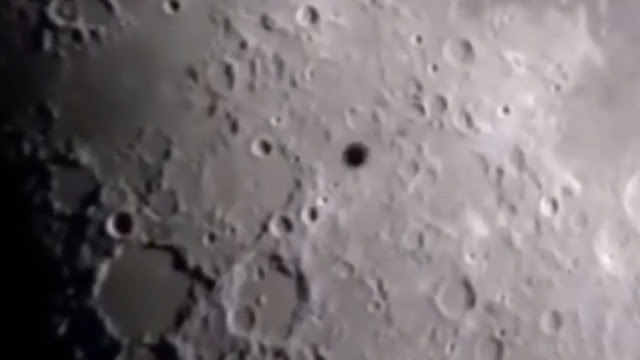 Two epic UFO sightings in their own rights.

I think both have their own merits and time will definitely be the witness to this, if in fact it turns out to be honest and genuine…

I’ve got a lot of faith in people’s honesty, if people want to pull a hoax or create a fake UFO sighting then that’s up to them. We all know that technology in this day and age really is the enemy of Ufology. I’m not going to let that dishonesty change my faith in people’s good intentions and honesty, absolutely no way!

I’ll always give everyone the benefit of the doubt because it’s the least that I can do. Why would I allow hoaxers to change my faith in people’s good intentions? Look, I’m not been naïve, I’m actually growing as a person who is always looking on the brighter side. Of course we could look at these UFOs and say, “I don’t like the look of it and people are deliberately faking them.” Then I’d have to move on without going any further looking into it.

Well, if that’s the height of the UFO research then it’s not worth a penny. One opinion is not and never will be research. So while people may look at this double UFO sighting and think “this is rubbish” just look at what they’re willing to class as their own research!

They’ve failed because it’s laughable. If you worked for me as a researcher you’d be politely asked to “get on one’s bike.”

If you can understand the language that the eye witness is speaking here in the Moon’s surface UFO sighting can you share a comment in the comments section below and let us know what is actually being said, cheers.

We can see the UFO come in from the top left hand side of the screen. It definitely get’s the guy’s attention who reacts to it just as anyone else would do. He might be speaking another language but that shock at seeing an unknown object is definitely universal.

The amount of UFO sightings footage from UFOs passing by the Moon is actually large. There’s that many examples it’s hard to really know what the end number is? In fact, I challenge anyone to try to, That’s an endless task actually because people are filming them on a weekly basis.

I’d like to know what this guy’s actually saying, it was uploaded to Instagram by bdmastro1 and all it says is that an unknown object passes by the Moon.

Guy’s, I believe that we should always give the benefit of the doubt that the UFO sightings are real, genuinely caught on camera. I don’t believe that everyone is faking the the larger, more detailed UFOs in some absolutely amazing UFO videos. Not everyone is cheating Ufology. Therefore we should look at these as the UFO sightings that they are, until such time it’s proved beyond a reasonable doubt that it’s not real. Don’t forget that anyone can claim anything though.