A rumor that is said to have occurred over 40 years ago. After a UFO crash, the Russian military allegedly captured an “alien baby”.

On July 14, 1983, a stampede was heard in the Russian town of Sosnovka, which forced residents to flee. The sky also turned purple and a forest fire started nearby, giving residents the impression that some unidentified object had fallen from the sky.

The police were the first to arrive, but they were unable to put out the fire and called the army. At dusk, a helicopter illuminates what appears to be the remains of a metallic object.

Kremlin agents intervene and take necessary precautions because the object was thought to be a spy device and landed close to the Chinese border.

What they discovered there is an oboidal capsule made of metal that is 1.5 meters tall and wide, with legs at the bottom and a small opening in the back.

When the military managed to open it, they discovered a baby that was about a year old, measuring 66 centimeters and initially appeared to be a fully developed baby.

The child was in wonderful health and was dozing. The child is immediately transferred to the Frunzee Research Institute, where staff allow a medical professional to examine the child.

The colonel in charge refused to allow anyone to touch the child until experts arrived, explaining that the child had apparently been thrown off a ship that was in distress and ended up on Earth as a result. 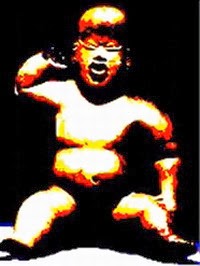 He was inspected by medical experts when they arrived and it was clear that he was not fully human because he lacked a belly button and a strange membrane connecting his toes and fingers. The doctor concluded that the young man must be of aquatic and extraterrestrial origin.

He had black eyes and X-rays revealed that his internal organs were quite identical to those of humans. The only oddity was that his heart was slightly larger than a human’s.

He warned doctors that the baby’s brain activity was much greater than that of a human, which made them wonder if the baby was capable of telepathy or telekinesis. The strangest aspect of all was that the baby never closed his eyes. He didn’t even sleep.

An internist, an anthropologist, a biochemist, a physicist and a psychologist examined the baby every day for three months, trying in vain to stimulate him in some way.

Small amounts of liquid were consumed by the boy known as Cosmic, who would occasionally go days without food before having severe breathing problems. Within 24 hours, the child developed an illness and died.

This remarkable example of the alien baby, which would have been lost to history years ago, has suddenly been rediscovered along with amazing video and details.