Having to aim a satellite at an asteroid drifting through space is the easiest part, just point it and off it goes…

Is what you’d like to think because it’s just a case of pointing it that way and turning the switch that controls the engines, on. 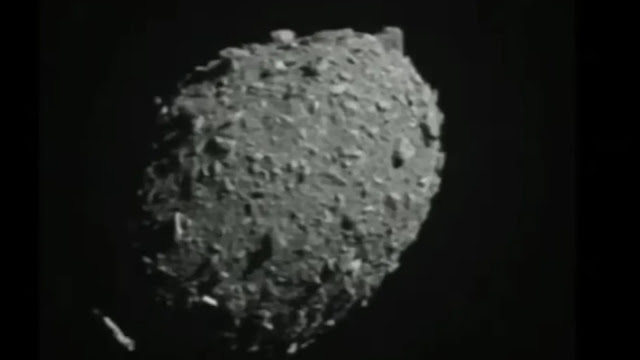 A 7 million miles away bullseye shot by NASA’s DART program.

So I can totally understand that this is the easy part but then your presented with an asteroid drifting through space at ungodly speeds which then becomes your target!

That’s exactly right when it goes from a simple aim and flip a button. Now there’s a Bazillion lines of code which needs constantly updating, it’s changing as it gets closer and closer to it’s target. Okay, even if this part is automated which I’m not sure it is, even if it is it’s something extraordinary to achieve.

Here’s the outline of the NASA mission, and it’s definitely a case of “either it’s wasted money or they know something that we don’t” and I’m really hoping that it’s a waste of money!

The Double Asteroid Redirection Test (DART) has been carried out to see if humanity has a chance of preventing the kind of disaster that wiped out the dinosaurs.

NASA’s either flexing their military might (even though it’s not military) but it’s a target, it’s a projectile and it was initially on top of a huge rocket!

It’s all military but not in name!

So, it’s flexing it’s military like capabilities saying it can hit a target literally blindfolded from seven million miles away! That’s way beyond mind blowing were talking about dumbfounding and incompressible. It’s a true statement whichever you want to look at it. And that statement is either a A, there’s a asteroid threat. B, a huge waste of money or C, it’s a statement of power.

Is there something else that we’re all not aware of? Does NASA have a hidden secret agenda for smashing a vending machine sized satellite into Dimorphos because it’s name is literally not equating to the actual test. It’s called Double Asteroid Redirection Test.

The word Double is a bit confusing because it’s targeted only one asteroid. It does not fit the actual test that it’s just carried out, right?

Also I’ll just point out that it’s literally the first time ever we’ve seen an agency (right after the UAP disclosure) testing out interplanetary defense systems!

It’s a bit unnerving and if so long as we’re going down that particular Rabbit hole, let’s just look at a few uncanny recent happenstances.

Timing; like I’ve just mentioned it comes on the back of the UAP disclosure videos released by the US Government and the US Department of Defense DoD and the US Navy.

Addendum; the recently added additional information to the Congress report you’ll find that there is in fact more UAP videos but they cannot be released due to them being a threat to national security! I kid you not, the security services have gone on record and stated that yes indeed there’s more UFO videos.  Oh but for sure they will not be releasing them as it contains matters of national security.

Now this dart program – or mission (whatever you want to call it) has taken place. What’s the chances that this quick succession of event’s has just played out in the order that they have “and they’re not connected?”

Reading between the lines, because the rest of the UAP videos have been deemed a national threat I’m thinking that there’s something in these other UFO videos which is scary, is very important, is foreboding, is a public threat, is a very historic!

Oh and by the way, the acronym UAP is what the man would like for us to call UFOs!

No, you laughed at us before and now your a part of it, you can bloody get on board.

It’s UFOs and by your own acknowledged words, you don’t know what they are but they exhibit intelligence. So yeah they’re UFOs and I’ll always call them UFOs. You ridiculed people, you harassed people, people lost their jobs, and you questioned people’s sanity. Have some respect and call them what they are.

Here’s the extraordinary video which was uploaded to YouTube by BBC:

If you have any thoughts or opinions on this video, please share it with us in the comments section below, cheers. Also please share this post, thanks.