The video starts off with the eye witness saying that it’s official, UFOs are real.

These are real and genuine UFO Orbs together in formation. 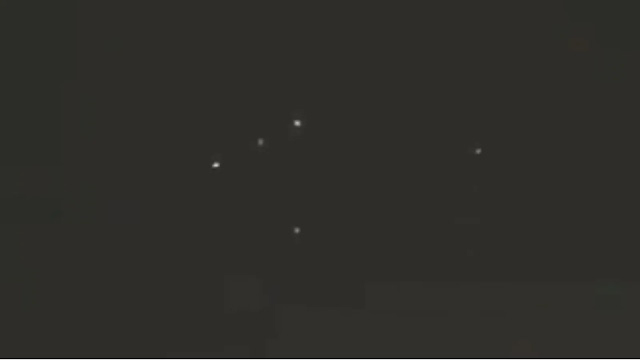 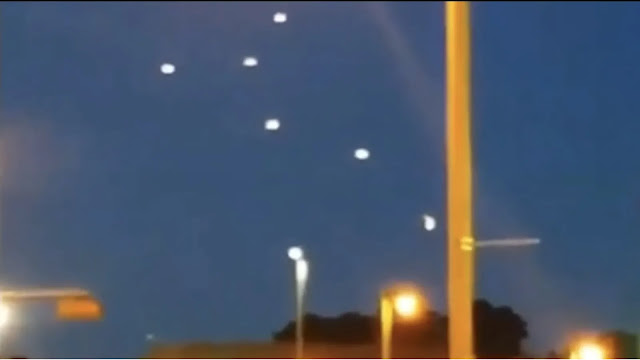 What’s your thoughts on these 2 equally strange and bizarre UFO sightings, is the bottom video creating a symbol with the UFOs?

The witnesses reactions are priceless but not entirely unique. I’ve actually seen these turn out to be skydiving but with them one’s you could see the parachutes above them. But these are way to close together and if these had parachutes, they’d be entangled up within moments.

That’s exactly why I don’t think it’s a skydiving team? I could be wrong but also the missing parachutes makes it kinda a high likelihood that it’s UFOs. Skydivers fall before the deployment of their parachutes and wouldn’t have any lights or flares acting or behaving like this without a parachute deployed.

There’s way to many inconsistencies between each of the arguments against these “not being UFOs.” A lot points to these being UFOs.

They’re hovering, they’re close together and skydiver’s prefer the daytime to skydive, right?

I mean because it’s safer to do this during the day, right?

I’ve heard that exact same reaction many times before when someone films themselves seeing a UFO. Of which is the eyebrows raised in agreement, it’s with the nodding, it’s the clear astonishment in their voices. It’s also the fact if how many people have seen it all together. Then the witness filming this UFO event say’s “yep, UFOs are real, look, look at that one.”

And it’s even possible to turn it into a UFO quote on a T.shirt.

“Yep, it’s official UFOs are real.” Because it’s true. The US Government has declared it so.

It would definitely look great on some white T.shirt with brilliant font or something that pop’s and grabs your attention. As you can see I’m not into making T.shirts for money or anything else like that because I don’t have online stores. Ufology is my career, it really is.

I write about something which I feel strongly about and I have done so since I was about 20. In effect I’m a writer which I write about how I feel and think about any given UFO sighting or conspiracy etc.

A quarter of a century later I’m still as excited about UFO sighting’s as the first day I remember seeing what I thought was a UFO but it wasn’t. It was actually a helicopter hovering lol. But it sparked my interest in Ufology and then I found ancient Aliens and Area 51, Roswell and CERN, crop circles, Alien abductions and so forth. Plus, let’s not forget about  conspiracies and the rest as they say, is history.

The directly above UFO video happened over the middle East somewhere, the information on both video’s are absolutely scarce, I’ve been looking for it for a long time without any success. That’s why I’ve had this post as a draft in my post editor on my website for ages.
Like I have said many times before, if we don’t post the UFO sightings footage that doesn’t have any information with them, it kinda say’s to the wilder world that it doesn’t exist, right? Refusing to post about it is what mainstream media outlets would definitely do because they have nothing to write about?
I’ve posted the first video above, top and I also decided that posting another similar UFO sighting to give us contrast would be great. So there’s 2 different videos here with multiple sighting’s with multiple witnesses and no information with them. Let’s see if possible, anyone recognises the locations and let’s see if anyone else has seen the same UFO sightings in the videos but elsewhere and maybe we can establish a timeline?

If you know anyone who would appreciate this post, please share it with them, thanks. If you have any thoughts or opinions on what you think this is in the video then please leave your thoughts and opinions in the comments section below, cheers.