It seems baffling that such a high level former executive of the World Bank would make such outlandish statements, but Karen Hudes testimony should at least be considered when attempting to put the entire ET puzzle together.

For decades, the theory that a secret organisation controls the world in the shadows has been around. However, it is now that an executive close to the elite who has broken her silence, revealing the truth: they are not from this planet.

One of the longest-running and most popular conspiracy theories of all speaks of a possible organisation that pulls the strings of our entire society; this elite would be found within the economy, religion, industries, and entertainment, occupying quite important positions .

Despite the fact that many people discredit it, this theory gains much more strength when a former World Bank executive is the one who decides to break the silence and publicly reveal that not only does this elite exist, but that they do not belong to this world.

This is so nuts, it’s hard to believe but it’s true. Karen Hudes was being interviewed by Future Money Trends when midway through the interview about conspiracies concerning global economy, she reveals the aliens that have been hiding at the Vatican. WHAAT?? When executive professionals such as Karen begin speaking out about these coming events, we need to start paying closer attention.

Reporter: Who is calling the shots at the Vatican? I am assuming it’s not the pope.” 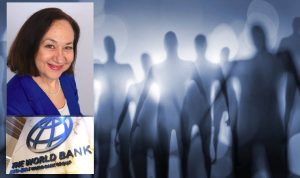 Karen Hudes: “Well, there is something called the black pope but that’s umm… that’s not the ultimate reason why we have been in the fix that we are in. What we have found out, and this sounds implausible, but it’s absolutely correct, the fact that its been held in secret doesn’t mean that it’s not true. It is true.

“There is a second species on this planet.

“They are not extraterrestrial, they are very much with us, they made maps in the previous ice age. The remnants of their civilizations are all over the place. A lot of times along the coast its submerged because the umm… amount, the sea level has gone up by 400 meters, but this group has large brains. They are very distinct from homo sapiens.

“Their DNA is so different that if the two species mated, their offspring would be infertile and we know this because their DNA was just tested. They have skulls all over the place because they have been on Earth with us, but after the ice age there weren’t that many of them. And so they have been hiding and one of the places they have been hiding is in the Vatican. That’s why the Vatican are wearing those miters. It turns out thats also what the high priests wore in the early beginnings of Judaism.

“… The people that were doing archaeology in Israel know this, and the reason is that not only are Homo Capensis trying to keep human beings under control by divide and conquer, using our money system, they have also been doing this with our religion.

“Organised religion. Trying to get human beings to hate people of different faiths so that they will kill each other off, so that the people in the back, manipulating human beings, could… what can I say, could use us like cattle. That’s what’s been going on through our history.”

Reporter: “Okay Karen, you’re an attorney, you worked for the World Bank for 20 years, what your saying is on the fringe of conspiracy, it sounds crazy so… I mean obviously you have had to come to terms with this. What have you seen that has made you so confident to actually say this stuff publicly?”

Karen Hudes: “Because they have been going to meetings. I sent an email to a fellow in Portugal and the next day he went to a meeting of Bankers and he sent me back an email saying that at that meeting there had been a big skulled individual with bright blue eyes.

Another person in touch with Doctor Edward Spencer, who is a retired neurologist, he’s the one who started telling me about this. A friend of his was in Egypt and saw these homo (cepranensis?) running around. They are umm… their skulls are all over the planet. It’s not a conspiracy theory. Just because this group likes to hide and likes to accuse people of having conspiracy theories doesn’t make these facts (raw?), they are facts.”

Karen Hudes was a fairly senior executive in the Treasury Department of the World Bank until 2007. In her résumé, she holds degrees in Law from Yale University and Economics from the University of Amsterdam.

In addition to his work at the World Bank, he also worked for the Export-Import Bank of the United States, including working in the World Bank’s Legal Department.

Hudes’s career was impeccable and she was held in very high esteem during the 20 years she worked at the World Bank, until she was fired in 2007 as legal counsel . The reason? Denounce the corruption of the elite that is dominating the world and its possible non-human origin. 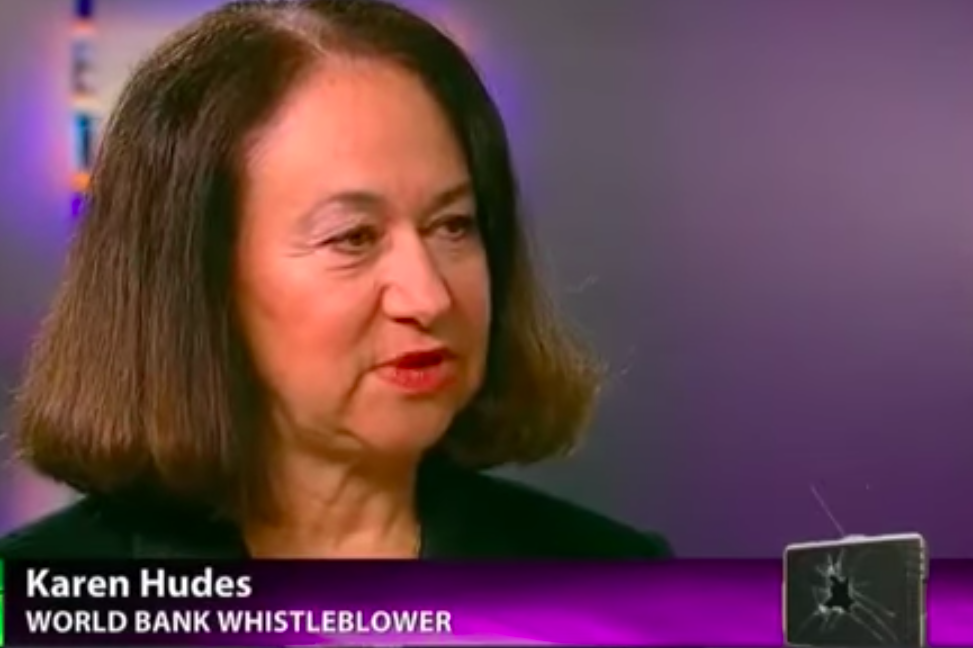 “Non-human creatures with elongated heads and an IQ over 150 control the Vatican and the world bank.”

With these words, Hudes began her public denunciation of what she personally saw when she held the position of legal advisor at the World Bank.

The lawyer and economist declared that extraterrestrial beings have been infiltrated for years in quite important positions of power. He assures that they do not belong to the human race and they are addressed as « Homo-Capensis ».
These beings have coexisted with humanity for many years, prior to the ice age.

In an interview with the news portal Next News Network , Hudes stated that, despite the fact that in the past he did not believe in any of that, he began to investigate to realise that there was historical evidence of creatures like the ones that would live today, with strangers. elongated skulls or as can be seen in Egyptian hieroglyphs.

Despite the fact that Hudes’ words have aroused great interest worldwide, to the point that television networks have wanted to interview her, she is not the first to denounce this.

The former Minister of Defence of Canada, Paul Hellyer , gave some statements in 2014 in which he assured that there are extraterrestrial beings working directly with the United States government.

We could be in control of a fairly important core of world institutions, including financial, corporate and religious to get dominance on the planet.

According to the theory, the goal of dominating these institutions is the enslavement of humanity through debt. They want to enslave all governments and politicians to give up huge financial contributions to use for their political campaigns.