An astonishing report was found in the archives of the FBI that reveals the chilling details about aliens, UFOs, and the way these objects maneuver. The documents suggest that some of the UFOs were apparently flying across the skies at an incredible speed of 27,000 miles per hour.

The FBI report is dated back to the 1940s when federal agents investigated mysterious crafts in regard to a flurry of sightings. The report also suggests that several documents related to UFOs and aliens were subsequently destroyed by the government.

The FBI report revealed that some UFOs moved at speeds five times more than sound. It was during a time when the infamous Roswell event happened. Initially, it was reported that a flying saucer crash-landed in Roswell but soon, the military claimed that the crashed object was actually a weather balloon.

Many of the memos for the entire study of aliens were addressed to Director J. Edgar Hoover and then placed in the secret FBI archives. Now, they are declassified and stored as an open electronic file in the FBI archives.

FBI officials admitted in an August 16 memo to director Hoover that their office destroyed UFO reports “in great numbers.” But curiously another memo written in 1950, which was released with a huge cache of declassified documents, contains a remarkable statement from special agent Guy Hottel about Roswell. 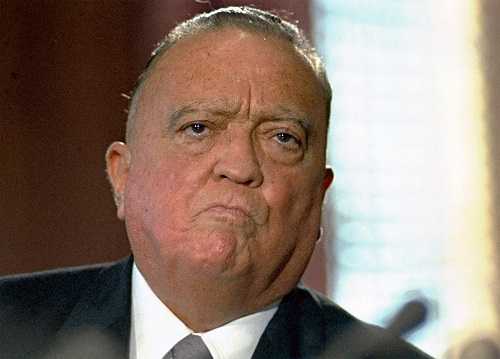 According to the FBI, “Guy L. Hottel was born around 1902. He was a graduate of George Washington University in Washington, D.C., where he was a star football player. He was later inducted into the university’s athletic hall of fame. He entered the FBI as a special agent in 1934. In December 1936, he was named acting head of the FBI’s Washington Field Office; he was appointed special agent in charge the following May and served until March 1941. Hottel was re-appointed special agent in charge in February 1943 and served until 1951, when he took a position in the Identification Division. He retired in 1955. Hottel was married three times and had two sons. Following his FBI career, Hottel served as executive secretary of the Horseman’s Benevolent Association. He died in June 1990.

”The memo states that the three flying saucers recovered in New Mexico were approximately 50 feet in diameter. In each of them, there was one alien creature, and their figures resembled human bodies a lot, however, they were about three feet tall and dressed in peculiar metal suits. 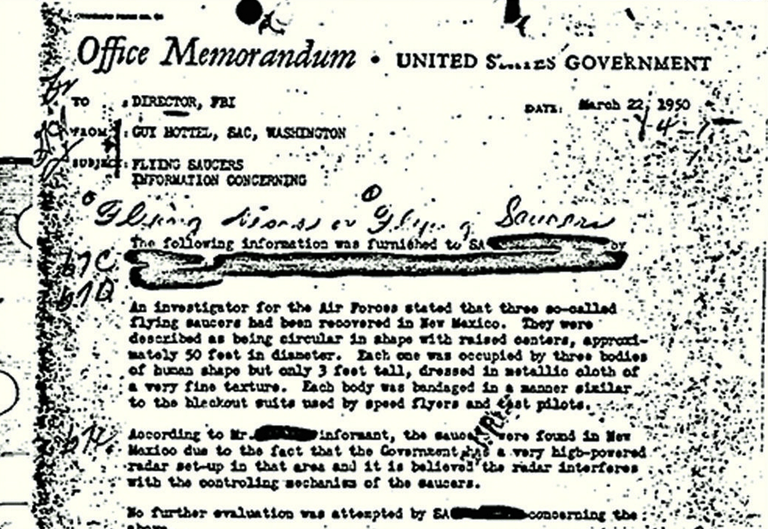 “They [the saucers] were described as being circular in shape with raised centers, approximately 50 feet in diameter. Each one was occupied by three bodies of human shape but only three feet tall, dressed in metallic cloth of a very fine texture. Each body was bandaged in a manner similar to the blackout suits used by speed fliers and test pilots.”

Presumably, these were specialized suits of foreigners, like those used by pilots, but made using alien technologies.

It is one of the popular declassified information released by the FBI that has been viewed more than a million times. Besides, the incident happened three years after the Roswell incident, and both have no connection with each other as stated by the FBI.

The document also said that the aliens were peaceful and really reminded people in some way of their behavior. The photo of two alien humanoids also became famous. It was taken before the intergalactic war between American intelligence and reptilians in 1979 at the Dulce Base in New Mexico.

Another declassified document from April 4, 1949, tells how three men, on patrols miles apart, each reported seeing a UFO break up over mountains north of Salt Lake City. Their accounts were sent to Hoover in a memo titled “Flying Discs.”

The file said that a policeman, a highway patrolman, and an army guard all “saw a silver-colored object high up approaching the mountains at Sardine Canyon” that “appeared to explode in a rash of fire.” And another file sent to Hoover, dated January 31, 1949, reveals the sighting by a pair of airline pilots.

They reported the “rocket ship” shaped object with no wings was hurtling out of a thunderhead at speeds of 2700 mph. And elsewhere in the document, further sightings are mentioned that can hit speeds of 27,000 mph. 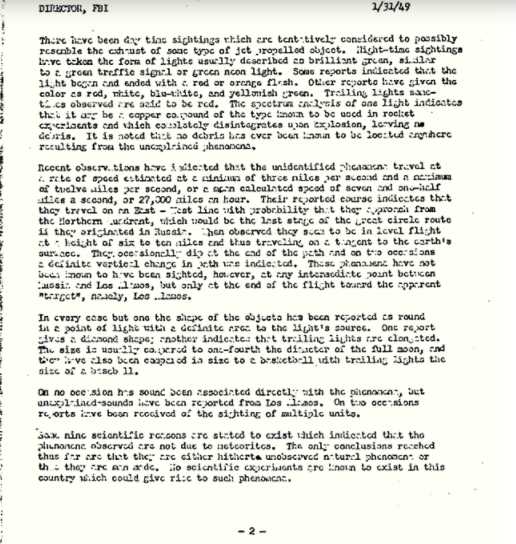 “No scientific experiments are known to exist in this country which could give rise to such phenomena,” the agent from the San Antonio office writes.

Perhaps hammering home a possible danger from UFOs, special agent DM Ladd also wrote a letter to Hoover. He warned he had heard a report of a transport plane in Czechoslovakia which collided with an “unidentified missile.”

“The missile and the transport were completely disintegrated without recovery of parts or survivors,” Ladd wrote.

While the discussion on bizarre UFO reports is going on, this year, the Pentagon released 1,500 pages of UFO-related research as part of a FOIA request.

According to a massive database of U.S. government reports recently made public through a Freedom of Information Act (FOIA) request, Encounters with UFOs have reportedly left Americans suffering from radiation burns, brain and nervous system damage, and even “unaccounted for pregnancy.”