The most so-called common extraterrestrial species described by contactees and witnesses is “Grey” or “Gray.” There are various accounts recorded in the government files where Greys are widely discussed. Preston Dennett, a well-known UFO researcher has the interesting case of a woman from California who encountered a gray alien named “Sen.”

It should be noted that all the cases investigated and recorded by Preston Dennett are based on real events. He began studying UFOs and the paranormal in 1986 when he discovered that his family, friends, and co-workers were having dramatic unexplained encounters. Since then, he has interviewed hundreds of witnesses and investigated a wide variety of paranormal phenomena. He is a field investigator for the Mutual UFO Network (MUFON), a ghost hunter, a paranormal researcher, and the author of 28 books and more than 100 articles on UFOs and the paranormal.

In his book, “Wondrous: 25 True UFO Encounters,” published in 2021, Dennett presented the encounters of Julia (pseudonym) and what she learned from Grey called Sen about her own encounters and the alien agenda on our planet.

At 19 years old, Julia left her family and home in Prunedale, California. Her childhood had been difficult, filled with unexplained events. She had tried to get help from her parents, but they were strict and did not understand her. So, Julia left everything behind and decided to get as far away from her home as she could.

She decided to just drop the subject not to think about it and move on with her life, but in 2011 everything changed. She had a sudden and very strong impulse to move back to California and as she said, “I honestly can’t tell you why I felt like I was being directed to do this.”

So, she and her boyfriend moved to pacific grove California and this is when her life started to get really strange again. She started having some weird harmonic ringing sounds in her ear, and her right ear was like tinnitus. She went to the doctor, but he could not explain it. There were no insects in her ear canal as she feared, and it was not tinnitus. The doctor had no diagnosis.

Then came the UFO sightings, weird glowing orbs hovering over the house. One evening, there was a ship overhead. Julia saw it through the skylight above her bed. The next thing she knew, she was paralyzed. A short time later, she fell asleep.

In the morning, she told everything her boyfriend. She could no longer live in denial. The memories of her childhood experience were flooding back. The excruciating tones in her right ear were becoming unbearable. UFOs were hovering over their house, and she finally found the reason for her problems. It was aliens, and they had been visiting her since she was a girl. Now they were back, and she believed the source of the tones in her ear was probably an alien implant.

Her boyfriend was shocked, but he was also very supportive. He believed her but had no idea how to help her. Deeply in love, they got married.

Julia examined her childhood. She remembered seeing colorful orbs when she was a little girl. She recalled hundreds of times when her bedroom was filled with light and scary shadowy figures materialized around her. She remembered a dramatic UFO sighting of a giant flying saucer when she was ten. Julia could no longer deny that she was having contact with extraterrestrials. 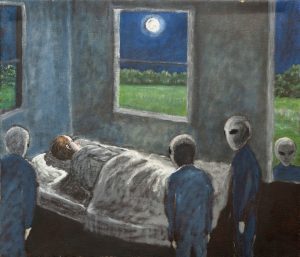 Then one evening, she woke up to hear a weird musical sound reverberating through the house. She wandered around, trying to locate the source. Then she realized, it was inside her head. Next thing she knew, Julia found herself being pulled onboard a craft. She saw that she was laying on a table in a small, round room, surrounded by short, thin, gray-skinned beings with large bald heads and big dark eyes.

They handed her a baby and asked her to hold it. It looked just like a gray alien. Julia was shocked. And looking outside the craft, she saw the darkness of space, and far below her, the planet Earth.

The next thing she knew, it was morning, and she was back in bed. Looking at her stomach, she saw three bleeding puncture wounds. Both Julia and her husband were shocked and traumatized. And they became even more shocked when they discovered that Julia was pregnant.

From this point, events escalated. Julia kept waking up to find herself unable to move. One evening, her husband woke up to see a gray alien entering their bedroom. Shortly later, Julia had a miscarriage. She was secretly relieved. The pregnancy had not felt normal, and she was certain that it had something to do with the night she was taken on board a craft.

At that point, her experiences ended. Or so she thought. They fled California and moved to the east coast. They had a baby boy and became pregnant with their second child. Then, one morning, Julia decided to reach out mentally to contact the gray alien baby she had held in her arms years ago. 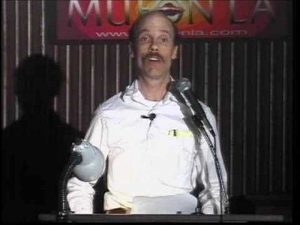 To her shock, she made instant contact. In her mind, she saw a gray. He introduced himself and said his name was Sen and that he was made up of her DNA. Then began an hours-long conversation in which Julia learned all the answers about everything that had happened to her throughout her life.

She felt very strongly telepathically connected to him to the degree that she actually found herself inside this little ship with him and could see everything he was seeing. This was the beginning of an hours-long conversation between Julia and Sen.

Julia said he showed her his planet, spaceship, and technology. Further, she was told about their agenda. Sen explained to her that his race used humans to bridge themselves back into the law of attraction. A long time ago, their species was like humans, beautiful creatures that reproduced on a planet they chose a life of exploration among the stars and began to experiment on themselves to create bodies better suited for space travel.

They began the long process of eliminating the strands of DNA that existed in the law of attraction hormones and emotions the vibrations and frequencies were changed using light therapy. This changed them physically into creatures that eventually became asexual once sensed people stopped feeling the vibration and frequency of attraction. They began to stop feeling a connection to each other, reproduction became uninteresting, and they began to clone themselves and some travel in space.

Julia came to know about the weird noise in her ears. Sen told her:

“It’s not us it’s you it’s the sound of your hormonal frequencies it is your sound and we are mapping that frequency.”

Julia noted:” He explained that the implant in my ear was a recording device that emitted and mapped the vibrations made by my hormonal and emotional responses. They mapped this vibration in order to replace this frequency with their own DNA. The baby I held on the ship had pieces of me but mostly they used vibrations that they had recorded into its DNA and when they handed me the baby.”