The UFO phenomenon often seems to happen in waves. Every once in a while a particular place will seem to draw these strange anomalies to it for reasons we can’t possibly comprehend. On occasion, some of these spates of UFO sightings will take a sharp turn into the truly bizarre, and one of these was a case from Canada that ended with a piece of physical evidence in the form of a copper disk apparently left behind by aliens, and which has never been deciphered.

In 1967, the city of Edmonton, of the Canadian province of Alberta, would experience a series of very strange events. It seems to have begun in the early morning hours of May 8, 1967, when a 14-year-old boy by the name of Ricky Banyard saw “a spaceship” in the sky as he walked through the Mount Pleasant Cemetery on his way home at around 2 a.m. It was described as being spherical in shape, with red and green lights and top and bottom parts that were spinning. From the bottom of the craft emanated a beam of bright white light that seemed to be scouting the ground below like a searchlight. The boy went to get his friend, Glenn Coates, and they both watched as it made its way towards some trees in the cemetery. They decided to get some binoculars and hide behind a tree nearby, where they were able to get a close look at the object, and Banyard would explain of what they saw:

It was 200 to 300 feet in the air and made a muffled whistling noise as it hovered. A white ribbon of light came from the bottom of it and spread out in a rectangular shape about 15 centimeters above the ground. The ground was white, as though white hot under it. When I stepped out from the trees for a better look, the light disappeared then there was kind of a screaming noise like a jet starting up. All the lights in the ship went out and there were about seven or eight bangs and it took off. 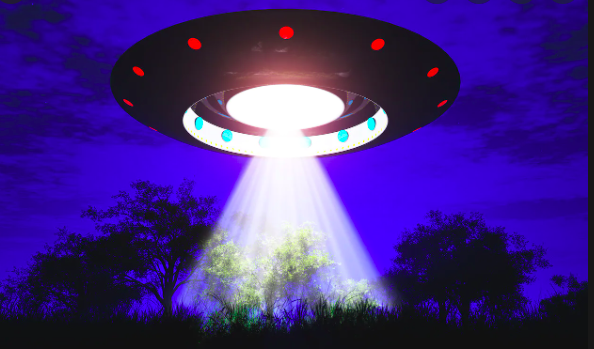 When they inspected the area where the light had hit the ground, they found some rectangular-shaped black streaks on the gravel road that wound through the cemetery. Banyard would make a sketch of the UFO, and when word got out about what he had seen there were droves of curiosity coming to the cemetery every night hoping to get a glimpse of the mysterious object. Two days after Banyard’s experience, a middle-aged couple living nearby also saw what they described as a spherical craft with red and blue flashing lights on its edges and a beam shooting down from beneath it. Ten days after that, a 29-year-old school janitor by the name of Jack Strangman saw a “whitish, oval-shaped” object lurking over the cemetery, and at around the same time a “really bright, egg-shaped” craft with two pulsing red lights at each end was seen streaking away from the cemetery and into the night by a witness named Norman Fibke. This series of sightings stirred up a lot of media coverage and talk at the time, and strange lights would be seen in the skies of Edmonton throughout the summer, but it would not be until November of that year where the strangest case of all would emerge.

On November 4th, 1967, an Italian immigrant in the area known only as “L.R.” walked back to his home after dinner with friends at around 11:30 p.m. and then sat in his room having a cigarette and relaxing, when he looked out through the window and noticed an extremely bright red light streaking through the sky over the Saskatchewan River near the Riverside Municipal Golf Course. He watched as it took a trajectory towards the ground and then stopped to hover in the sky. Although he had at first thought it was a plane, he could now see that it was not, and his curiosity caused him to go to the window for a closer look. He could see that the object was round in shape, and had a very bright red, pulsating light, almost blinding in its intensity.

As he watched the strange object hover, it’s fierce red light suddenly blinked out, and it was as if the whole craft had vanished, and shortly after this, an ethereal blue ring appeared in the air, which then descended towards the ground to seemingly evaporate. Soon after, another blue ring did the same, then another, and after this the red light blazed on once again and a smaller light ejected from the bottom of the craft to go flying towards the ground. This smaller object seemed to be a silver sphere with a slight violet glow, and as the larger craft remained stationary it flew around over the golf course, creating a buzzing noise as it did so, finally landing on the ground to seemingly vanish. A few minutes the light went on again and this smaller object flew up towards the larger one to disappear within it. After this, the larger object became brighter, its red light pulsating furiously, before the craft shot off into the distance.

The next day, L.R. went out to take a look at the area where he had seen the strange light show the night before. He made his way out over the golf course and after some time of looking around discovered where he surmised the smaller craft had landed. It was a circular patch of flattened grass about 16 feet wide, and off to the side were some anomalous holes in the ground. As he surveyed the area some more, something glinting in the grass nearby caught his eye, and when he went to see what it was he found lying there a plate made of what looked like copper, measuring approximately 17.3 cm (6.8 inches) wide by 12.5 cm (4.9 inches) high. Upon its surface were what appeared to be some sort of hieroglyphic-like drawings and symbols, their meaning inscrutable. Mesmerised by what he was seeing, L.R. picked up the plate to find that it was extraordinarily thin, only about 1 mm (0.04 inches) thick, and after studying the strange pictographs on its surface he took it home with him. At this time, he was convinced that this plate had come from one of the crafts he had seen, so he was very careful not to damage it as he had the impression that it was quite fragile.

Back at his home, L.R. wondered what he should do next and whether he should show the mysterious plate to someone, but in the end he decided that no one would believe him and so he held onto it and kept it a secret for years. When he went back to Italy six years later, he brought the strange artefact along with him, and somehow word got out about it in an Italian magazine on unsolved mysteries called Il Giornale dei Misteri. This captured the attention of UFO researcher Daniela Giordano, who talked personally with L.R. and has said of their correspondence:

At that time I was living in Rome and after some telephone calls to the magazine I obtained the telephone numbers of L.R. who was living in Southern Italy, near Naples. Thus, I got in telephone contact with him. He confirmed the story and told me he was not interested in analysing the plate, in spite of my insistence. It was just like a lucky mascot for him, stored in his strongbox, and all this interest about his story was starting to disturb him. Moreover, he didn’t have much interest in UFOs and related matters. So, after this conversation, I proposed to send a friend of mine, living closer to his town, with the task of taking a photo of this strange plate, nothing more. He agreed, and I sent my friend to see him. Since this I have had no further contact with him, but I have been working in my free time to try to understand this puzzling plate. As far as I know, no other researchers have ever studied or done research on this strange object.

The photo that Giordano managed to get of the plate is the only known photographic evidence of the mysterious object. Giordano would manage to track L.R. down again years later, and hear that he had lost the plate when the police had stopped him one day on his way to work and confiscated his car and the bag he always carried it around in after his vehicle had been hit by a mysterious gunshot. A week later he got his car back, but not the plate, and he would never see it again. Where it went is anyone’s guess, and this means the only sign that it ever existed at all are the testimonies of L.R. and Giordano and the photograph. 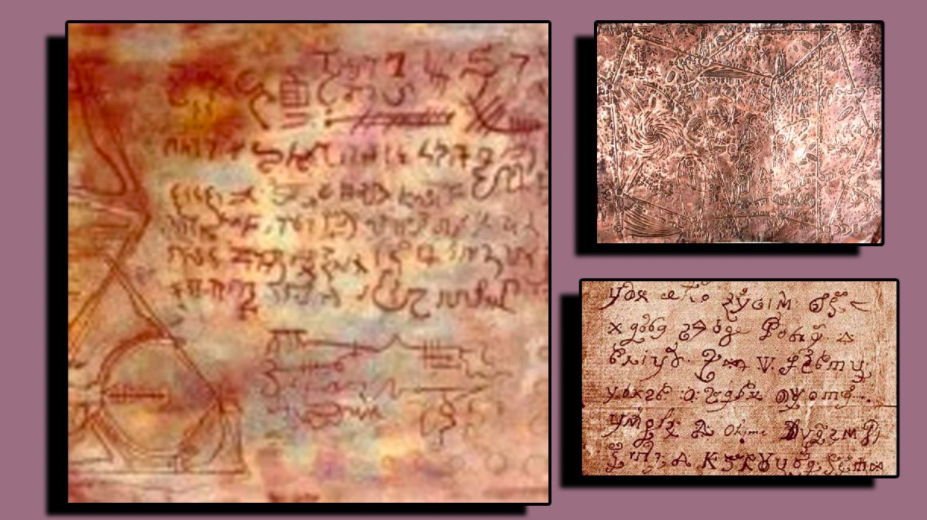 It is all a truly bizarre case tied in with other sightings from the same area, and we are left to wonder just what was going on here. Was this something dropped or intentionally left behind? Was it just a hoax? If it was real, then where did it go and what did it say? We will probably never know.